My recent study of the LRC has provided a proper introduction into the world of snowfall forecasting. Without the LRC, creating a realistic backyard snowfall forecast would have been impossible and I would still be living week to week with false anticipations and snowfall anxiety. The guidance I have shamelessly acquired from LRCweather and WISN12 have been the catalyst in this endeavor.

I believe calculating and then graphing, thank you Scott, the daily maximum temperature deviation from the long term average has helped me realize that the cycle actually breathes. Analyzing the graph allowed me to line up the temperature peaks and valleys of each cycle to notice the continual change in length. The change in length is not drastic however, which I believe allows for stability in using the LRC for forecasting. The graph below displays the first three cycles, to date, of the 2010-11 LRC using 47 days as a constant. I chose 47 days because that may have been the official length of the LRC when I created my first backyard snowfall forecast on Dec 17, 2010. 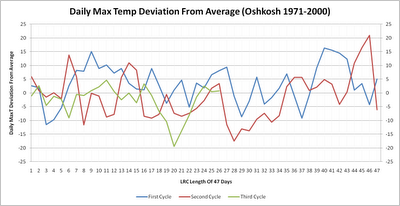 Another way to watch the cycle breath is to analyze the 500mb plots. However daunting this task seems it is useful to make self proclamations on the length and to then let the professionals claim otherwise. There is no better way to learn than to learn from mistakes. This philosophy led me to the comparisons below. I will be comparing the plots frequently this forecast period to watch more closely when and, hopefully, why the cycle changes length.

Looking back at the past month it is obvious that this segment of the backyard snowfall forecast is calling for the "signature" storm a few days early. I am determined to not change the original forecast but at the same time correct the mistakes I made for the second forecast. A few mistakes I made were thoughtlessly thinking each storm was to provide snowfall, every snowfall was to bring a 10 to 1 ratio, and that the cycle would be static and easily determined throughout. Hopefully the correction of these ideas will help me provide my household with an improved forecast this time around as we enter the end of the third cycle and beginning of the fourth cycle. Current statistics on my first attempt at a backyard snowfall forecast are listed below. Although it looks close, the actual total of snow does not yet include the 'signature' storm which is my defining point in the forecast period length.

I have attempted a second snowfall forecast which extends into March using a 50 day cycle constant. It is located here. It provides information on potential snowfall occurrences and accumulations. Up to 18 inches could fall between now and mid March. That amount would put OSNW3 into some of the winter forecast predictions bulls eye that were made prior to the season beginning. Well, the LRC winter forecast at least.
Posted by Josh Herman at 11:00 AM No comments:


As the month trudges on and the weather patterns cycle I can't help but think about how awesome Lezak's Recurring Cycle theory is. It allows average folk like myself to become much more aware of the struggles that exist in short and long range weather forecasting. To have forecast a month ago that a couple storm systems would pop up this coming weekend and early next week using sophisticated computer generated models would have been blasphemy. We are certain to not trust any model further out than a couple days. BUT, with the LRC it's almost second nature to do something so asinine. I strongly believe it is a tool all professional forecasters should carry. With that said, how am I doing on my rookie attempt at using the LRC to generate my backyard snowfall forecast? Currently I am 2 for 3 on predicting an actual snowfall during a forecast period. As far as amounts are concerned, I am slightly below 50% on accuracy. Not too shabby in my opinion. Total snowfall predicted for the period of Dec 17 through Jan 31 is around 14". Since Dec 17 OSNW3 has recorded 9.0" and with two predicted periods of snowfall remaining I can confidently say that 14" is certainly obtainable. More on this to come as we begin the transition out of the current forecast period and into the 4th cycle of the LRC. I am very excited to watch it all evolve. As always, the crew at WISN 12 in MKE and LRCWeather in KC are great educators on all subjects pertaining to weather, climate and the LRC. I recommend a visit to their sites for all curious persons.
Posted by Josh Herman at 11:45 PM No comments:

Email ThisBlogThis!Share to TwitterShare to FacebookShare to Pinterest
Labels: 2010-11

The storms that rolled through Dec 29-31 brought warm air and rain with them. Something that I did not think would happen back on Dec 17 when I created my backyard snowfall forecast using the LRC. I will admit I was skeptical of this particular system due to the direct southerly flow in the first cycle, but with it being the end of December I thought that it would at the least snow a little bit. Not the case. This got me thinking about a way to accommodate for different types of precipitation when committing to a long range snowfall forecast. Perhaps I could use the temperature deviation from the long term average or the deviation from cycle median occurring in the previous cycle for a clue? After comparing the most recent activity in this cycle and it's partner in the previous cycle I concluded that the cycle median deviation from average was ambiguous, but the deviation from the long term average was not as anomalous. The results may have persuaded me to predict less snow had I thought of this potential component. We'll see if this turns out to be matter for more thought. Click the link above for my latest analysis, fun.
Posted by Josh Herman at 12:05 AM No comments: