The Northern Hemisphere 500mb map compare for the 2012-13 cycle has begun at the OSNW3|WxClimate website. Click on the image, then use the drop down selection and select "2012-13 Loops" to check them out. 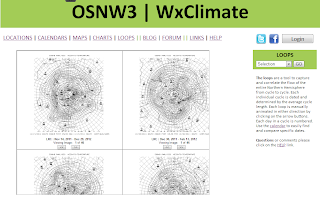 "The loops are a tool to capture and correlate the flow of the entire Northern Hemisphere from cycle to cycle. Each individual cycle is dated and determined by the average cycle length. Each loop is manually animated in either direction by clicking on the arrow buttons. Each day in a cycle is numbered. Use the calendar to easily find and compare specific dates."
.
Posted by Josh Herman at 10:20 PM No comments:

But What Is It Good For?

"I confess that in 1901, I said to my brother Orville that man would not fly for fifty years... Ever since, I have distrusted myself and avoided all predictions." -- Wilbur Wright, 1908

After a few muses from @kcwxguy I found myself knee deep fiddling with Google Visualization. It soon became a fresh way to visualize my forecast model data based on LRC theory. The winter of 2012-13 begins my third year following the cycling weather patterns of the northern hemisphere. An eagerness to learn has grown into a passion. From a once inconceivable backyard snowfall forecast in 2010, to a winter outlook for Oshkosh in 2011, to seasonal forecast numbers for the entire Midwest in 2012-13. The idea has certainly grown on me.

As we get "pattern change" shoved down our throats the next two weeks I want to reiterate the fact that this "pattern change" is not something new to the eyeballs that have been following the cycling patterns of 2012-13. The particular pattern has been projected for months. It is evident in all of the trends for the cities that will be affected. I will focus on temperatures. Below is a screenshot animation from the OSNW3|WxClimate site of a Google Geo Chart depicting the maximum temperature deviation for the Midwest cities selected for trends this season. There are three images in the animation. An image for Dec 1-14, Dec 15-28 and Dec 29-31. Clicking on the image will take you to the maps website for a larger view.

What isn't on the media radar yet, well at least I haven't seen it, is the extreme warm-up that could take place in the Midwest the last few days of 2012. Below is another screen capture of the OSNW3|WxClimate site. This Google Motion Chart is showing all of the cities max temperature departures from average for the month of December. By following the thick blue line it is evident something warm will be recurring near the end of the year. The same idea is shown above in the third frame of the animation.

We all know a weather prediction made one month out is seldom followed through to fruition. Most of us will not trust a computer generated forecast more than 3 days out. A major asset of the theory, in my opinion, is it's ability to predict significant "pattern change". Give or take a day, I am confident this will all take place, even before the populous had hints from long range computer models.

If there are any questions or thoughts on my research and analysis of the LRC or how I presented the material just let me know in the comments section of the blog. Thanks for reading!