With the fourth passing of the 'signature' storm in the annual RRWT and winter keeping a grip on the region I feel it is a great time to share the research I've done on the Oshkosh winters of 1977-78 and 1978-79. I decided to research these winters for a couple of reasons. The first being to learn the weather, climate and local history that accompanied the second all-time back-to-back snowiest seasons in Oshkosh's recorded history. The second reason being to research the Recurring Rossby Wave Train within them extending my learning of the method by providing visual details of the recurring patterns.

RESEARCH
I started my research of finding the RRWT within the two seasons by collecting the 500 mb heights from Green Bay, WI for the months of August through July (U of WY Department of Atmospheric Science). I then trended the data noting where major swings were taking place. Those swings led me to specific dates to view archived daily weather maps and compare 500mb plots (NOAA Central Library U.S. Daily Weather Maps Project). Paralleling the archived daily weather maps of U.S. with the 500mb heights from Green Bay I was able to find an average frequency for each season. 1977-78 about every 59 days and 1978-79 about every 58 days.

Framework of the Recurring Rossby Wave Train; Establish numerical output of recurring atmospheric states. Further explore the interrelated nature of planetary and synoptic waves via statistical modeling. Reflect this temporal and spatial behavior of Intraseasonal Oscillation to weather patterns based on the empirical data.

SUMMARY OF BOTH WINTERS AND RRWT
The winter of 1977-78 was characterized by two very snowy periods lasting about 17 days each. 28.6 inches of snow fell between Nov 23 and Dec 9, and 16.1 inches of snow fell between Jan 19 and Feb 5. The deepest depth of the winter of 19 inches was recorded in early December. Overall snowfall totaled 66.2 inches falling on 37 days with a max 24 hour snowfall of 9.0 inches which came from the worst blizzard to hit the region in quite some time. Temperatures plummeted below zero 38 times bottoming out at -11 in late January. Winter lasted 116 days starting on Nov 30 and ending on Mar 25, according to the OSNW3 Winter Duration. Click here for the winter duration graph. Click here for the daily climate data. Click the image below for newspaper headlines from the Oshkosh Northwestern dating Jan 25-31, 1978 documenting what the folks of Oshkosh were dealing with that winter. 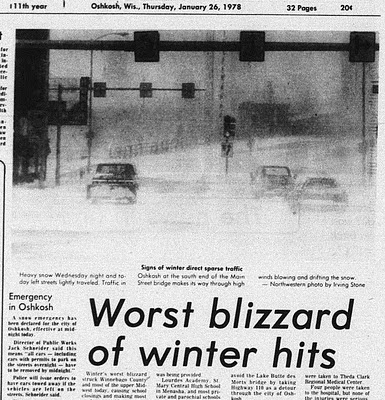 I chose two specific events during this season to follow through the recurring patterns; the first measurable snowfall and the first six inch snowfall of the season. The first measurable snowfall event brought a small amount of precipitation and/or snow each recurrence. A cool down followed the light precipitation during as a trough funneled in seasonably cool air to the region. The first six inch snowfall event brought a major snow storm/blizzard to the area in late January dropping 9 inches of new snow and ushering in an eight day span of daily high temps in the mid to low teens. A trough digging south into Texas brought the cold and snowy times to the region early in the season.

The winter of 1978-79 was characterized by a persistent cold and snow that left an intensely deep snow pack that had a slow reprieve. Enduring back to back to back to back snow storms, the Jan 13 snow pack measured almost 2 feet and by Jan 25 the snow pack was at it's greatest depth of the winter, 28 inches. Not until Feb 23 did the snow pack fall below 20 inches giving the area a 20+ inch snow pack for 42 consecutive days. Overall snowfall totaled 87.5 inches falling on 44 days with a max 24 hour snowfall of 7.1 inches. This seasons snowfall total coupled with the previous seasons snowfall total of 66.2 inches is the second snowiest back-to-back winters in Oshkosh history coming in with 153.7 inches. The seasons of 1895-96 and 1896-97 are on top with 171.7 inches (the seasons of 2007-08 and 2008-09 are third with 146.0 inches). Temperatures dropped below zero 34 times with the coldest reading of -21 occurring in early January. Winter lasted 123 days starting on Dec 11 and ending on Apr 12, according to the OSNW3 Winter Duration. Click the link for the winter duration graph. Click the link for the daily climate data. Click the image below for newspaper headlines from the Oshkosh Northwestern dating Jan-Feb, 1979 documenting what the folks of Oshkosh were dealing with that winter. 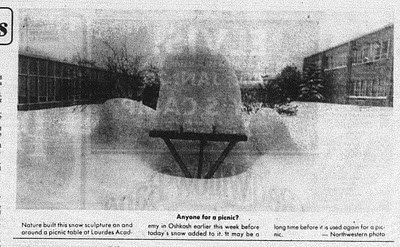 With so many events taking place during this season I chose two random spots within the pattern that had a 'signature' to it and followed it through; A trough trudging it's way across the Great Lakes and a low pressure off the coast of southern California. The trough brought ridiculously cold air to the area and abnormally cool air in the early warm season.

The "Firsts and Lasts" of both winters can be used as a quick comparison tool. Both winters started quick and snowy but only 78-79 was able to maintain and prolong the season into early April. Easy to tell from the list below that 78-79 was the monster of the two. FINAL THOUGHTS
Regarding Oshkosh in general, the Oshkosh Northwestern from the 77-78 winter tells a tale of snowcoverd sidewalks becoming a problem throughout the city. The lack in enforcement of the city snow removal code clogged sidewalks and news of it peppered the newspaper . The following winter, 78-79, it was noted that snow blowers had been sold out in all of Oshkosh. I have yet to experience such snow depths while living in Oshkosh, but I am certain I would have been a culprit of having a too often snow covered sidewalk. I rarely shovel anything less than an inch and if it weren't for my hard working neighbors and a periodic melt, my sidewalk would resemble my driveway most of the time, usually snow covered. (proof that the times have not changed)

The data and graphs that led me to my conclusions can be found by downloading the Microsoft Excel file located here. The file contains highlighted areas of my research which include daily surface data, atmospheric sounding data/graphs and event specific information of both winters. The archived daily weather maps used in the comparisons are located in the specific discussions but can also be found in each seasons image gallery here (1977-78) and here (1978-79). Using the spreadsheet I linked above will allow one to pin point particular weather events and dates from this time period. Referencing the maps from the NOAA Central Library U.S. Daily Weather Maps Project would then allow one to see the RRWT for themselves. I recommend using the maps to see other parts of the patterns from 77-78 and 78-79.

If anyone reading this has a memory from the time period discussed, please share your words in the comment section of this blog. It would be much appreciated. Also if there are any questions about my research and how I presented the material just let me know in the comments section of the blog as well. Thanks!
Posted by Josh Herman at 10:55 PM No comments: