After further analysis I may have had a miscue in my day counting back in May. Never the less. It is summer in the CONUS. The jet is moving pole ward. Looks like there may be an event this time around, but as pointed out way back in January, it's a wimpy Low.

I will likely be posting the 7/7 map, along with storm reports from the forecast below.

BUST - I think that H in the four corners held the system from dropping down. A result of the jet stream shifting north? Slowly but surely. No matter, I'm confident that the pattern we are moving into spun several @weatherchannel named storms this winter (grey shade). Will watch this particular pattern (yellow shade) through it's entirety - in early July (5-6) when WI will surely be in the path. LOL.

----
originally posted Apr 28, 2013
Again the time is nearing. How is this pattern going to act this time around? The bet has evolved into an accompanied count of reports from just a warned area. This idea is absurd. Right? I assume I will be laughing at myself in two plus weeks. (For some reason I banked on the cycle coming in at 51 this time around. Seems it may be 52 or 53. My dates need to be extended by a day or two) 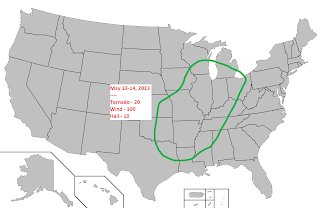 The time has passed, I lost the bet. Now we wait until May 13-14 for the next recurrence. How will it act?

Update: Archived radar loops of this storm from past cycles.

We may have been a bit cryptic on the AccuWx Forum LRC Thread, so I will attempt to toss all the images into a quick blog entry. Click on each of the images for more information.

This is the pattern I have chosen to wager a "weather future" on. While the future may not be my retirement fund, it very well could be some of the best BBQ I have ever tasted. I am not a severe weather guy, nor have I ever chased, but if I were to pick dates on when I would, it would be March 25-26, 2013 ish. Using a 53 day cycle length I may be a day or two long on my dates. We'll see how it turns out. I've already read some trash talk of my choice; "you will need it to wrap up more next time. Wimpy surface low" - LOL. Be that as it may, I am wishcasting a winner! We will have a very good idea of what it looks like in the Pacific 2.5 - 3 weeks prior to the CONUS version. Stay tuned to the AccuWx Forum LRC Thread.

If there are any questions or thoughts on my research and analysis of the theory or how I presented the material just let me know in the comments section of the blog. Thanks for reading!
Posted by Josh Herman at 2:00 PM